In forming Sostevinobile, Your West Coast Oenophile dedicated this still-nascent venture not only to creating a singular temple for wines produced along the entire stretch of the North Pacific’s West Coast (Baja California—British Columbia), but committed these efforts to the highest level of sustainability we could attain. My personal dedication to this latter facet of our business is to cycle as much as possible, instead of driving, notably throughout the confines of San Francisco proper, as well as points attainable over the Golden Gate Bridge. At least as long as my increasingly wobbly knees will withstand.

And so, one might assume that I regarded the dramatic reduction of automobile traffic, particularly at the start the damned pandemic, as a boon. But, as it turned out, the remarkably clean air proved quite the annoyance. As soon the sun began settling past the meridian, the blinding glare became overwhelming, making any kind of westerly route unbearable, if not hazardous. Dare I say I actually began to miss the air pollution?

Heading to Paso Robles earlier this month, my route required that I pass through the confines of the tech jungle for the first time since 2019. Much to surprise, in the offing to my left, there hovered the famed San José smog along the Diablo Mountains that bifurcate Santa Clara County. Could this be an omen that the end of COVID-19 was finally within sight? Could foul air mean congested traffic mean a return to normalcy? It’s enough to make a wine guy want to learn how to plot an algorithm!

But nothing that Legoland (my derisive term for Silicon Valley) offered could dissuade me from reaching my destination for the weekend. Various complications had kept me from visiting Paso since 2018, so the opportunity to return for the revived Garagiste Wine Festival proved too compelling to miss. Arriving the day before the Grand Tasting, I spent the afternoon reacquainting myself with the township. 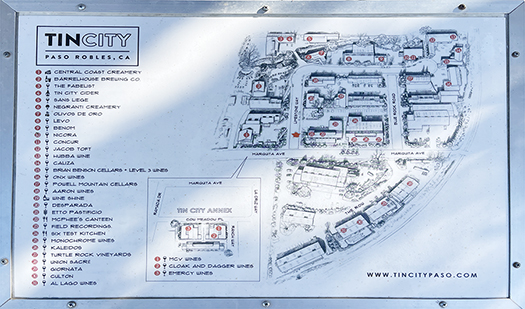 For the past several years, ground zero for cutting-edge winemaking in Paso Robles has been the eclectic collective known as Tin City. But what had been a relatively underground enclave had blossomed into a full-fledged destination, overflowing with wineries and tasting rooms, as well as breweries, cider plants, restaurants and artisan food purveyors. Not to mention teeming with locals and tourists alike. As Dorothy Gale might have said, “I’ve a feeling we’re in Kansas anymore!”

A sign of COVID times, simply dropping in on a Tin City tasting room no longer is an option, a change that severely hampered my modus operandi. Nonetheless, I was able to schedule a special trade appointment with Giornata, Paso Robles leading producer of Italian varietal wines. Brian and Steffi Terrizzi are both fellow members of NEB, so, not surprisingly, their 2018 Nebbiolo Luna Matta—for the uninitiated, Nebbiolo, the grape that constitutes both Barolo and Barbaresco, is known among cognoscenti as the wine for when Pinot Noir drinkers grow up—proved extraordinary, as did the 2018 Aglianico Luna Matta.

Giornata’s Fatto a Mano series of wines might be deemed “natural,” but the term hardly does justice to these painstakingly crafted wines that are aged in amphorae. Standouts among these selections were the proprietary white blend, the 2020 Bianco Estate, a deft mélange of Trebbiano, Friulano, and Ribolla Gialla, and their esoteric red, a co-fermented 2020 Grenache Moscato, produced with Moscato Gialla and an early picked Grenache Rouge.

As much as I enjoyed these two wines, my eyes nonetheless gravitated toward the 2020 Falanghina, my first experience with this varietal as a skin-contact wine. But, of course, I could not overlook the flagship 2020 Ramato, easily the intensely orange Pinot Grigio I have ever experienced. An utterly superb bottling!

Even after two hours, I could have stayed on—and perhaps should have, after learning that the renowned Luna Matta Vineyard, the crown jewel of Italian varietals in Paso Robles, was being replanted with Cabernet Sauvignon—a most egregious development in my book. But the Grand Tasting for Garagiste beckoned, and even without cohesive directions to the Paso Fairgrounds, I reluctantly departed.

COVID-19 has been so devastating, in so many ways. For like myself in the wine sector, its impact on trade tastings has been particularly arduous, not just stifling all aspects of our business practices but depriving us of the camaraderie these gatherings foster. Since California’s putative lifting the pandemic color coding system, there has been a slow reemergence of trade events, though most have been a pallid vestige of their former incarnations, with reduced attendance capacities, substitute pourers, a dearth of trade/media passes, and astronomical ticket prices—particularly in Napa, where some four different AVA events sought ~$175 for a two-hour tasting.

A number of imported wine events have resurfaced these past six months, including St. Emilion, Portugal, Georgia, and the annual Simply Great Italian Wines, though almost all were represented by their American distributors. While these events help as a point of comparison and often attune my palate to varietals like Saperavi or Alvarelhão that have scant plantings here in California, they offer little in the way of reigniting Sostevinobile’s core mission.

Since June, I’ve been happy to attend the inaugurals of both the Chardonnay Classic and the Cabernet Classic at Vista Collina, as well as Healdsburg Crush, the revamped rendition of Pinot on the River, all of which still were generous enough to accommodate select media and trade. And I was most please to be once again selected as a judge for USA Wine Ratings. But it wasn’t until Garagiste that I felt a true sense of return to normalcy.

The true beauty of these tastings is the opportunity to discover an array of small producers whom I might not have otherwise encountered. This time, after a 2-year hiatus, the list of newcomers was bountiful, with 23 wineries to add to the Sostevinobile database. Layout of the Paso Event Center lent itself to an easy alphabetical navigation, which I followed in reverse order. Just because…

Here’s a brief synopsis of the wineries I discovered:

I wish I could have remained in Paso Robles for several more days, but I had committed to the revival of the West of West tasting being held in San Francisco. Held amid the hyper-elegant confines of The Battery, this intimate gathering assembled all the hallmarks of a well-appointed professional tasting, compact yet easily navigated, hampered only by its lack of a printed program. To be honest, there was little revelatory to this event; given the narrow focus (Chardonnay and Pinot Noir, with a splash of Syrah) of the West Sonoma AVA, I have long been familiar with the selections each winery has to offer. My attendance here was primarily to show my support and to reconnect with the winemakers on hand after the arduous 20 months of pandemic separation.

Granted, these two events were not 100% back to pre-COVID status, but things finally felt close enough to declare “we’re back!” But then Taste Washington announced they were compelled to cancel for 2022, South Australian Shiraz: Iconic and Ageworthy postponed until January (or later) due to shipping difficulties, and up pops the Omicron variant. Sempre lo stesso…