A curious comment Your West Coast Oenophile overheard at a trade tasting recently. A wine buyer from a certain local restaurant scoffed at the notion of drinking California wines and exulted that they had been relegated to an obscure table at the rear of this event. In part, this kind of myopia is what gives Sostevinobile its focus in dealing exclusively with sustainably grown wines from the West Coast, but readers here, as well as our future clientele, need appreciate that our choices stem foremost from a belief in the excellence of the wines produced here. So, with this credo in mind, I recently headed up to the top of St. Helena to stage a somewhat ragtag shootout I dubbed The Judgment of Piemonte.

Now much attention has been paid in 2016 to the 40th Anniversary of the legendary Judgment of Paris tasting, with commemorative events, seminars and celebrations having taken place throughout the year (though I am rather baffled as to why the major tribute should have taken place in Washington, DC). Previously, the 30th Anniversary restaging of the tasting again placed California above the French entrants. Five years later, the Chinese wine industry sponsored its own derivation of Steve Spurrier’s competition, the Ningxia vs Bordeaux Challenge, in which four of the five Chinese wines bested the top French entry. And earlier this year, Oregon’s Domaine Serène’s 2012 Pinot Noir Winery Hill Vineyard topped Burgundy’s selection to win the Platinum Best of Show at the Decanter World Wine Awards.

As such, it seemed only fitting that Sostevinobile sponsor a tasting featuring anything but variants to French cépages. So when Nile Zacherle boasted he knew of no other California-grown Nebbiolo that could rival his selections at David Arthur, the die was cast. Longtime fans of their esteemed Elevation 1147 may not be familiar with their Italian varietals, but this Pritchard Hill icon most certainly has the wherewithal to afford deviating from Cabernet exclusivity.

In turn, my long-standing affiliation with the Nebbiolo Enthusiasts & Believers (NEB) afforded me special insight into premium West Coast producers of this rich varietal. So naturally I marshalled a couple of ringers to counter Nile’s challenge. From Sebastopol, Emilio Castelli produces a line of vineyard-designate bottlings, as well as one sourced from the heralded Luna Matta Vineyard in Paso Robles. Further south, Palmina’s Steve Clifton is a sedulous devotee of the grape, with four distinct bottlings each vintage.

And so the lineup was set. It was a spectacular sunny day, perched high up on the hill overlooking a remarkably full Lake Hennessey, the kind of setting that gives one pause to wonder why anyone would have wanted to herd cattle here, as Long Ranch was originally intended. Emilio hade the leisurely trek over from Sebastopol while I frantically dashed from my San Francisco abode once Palmina’s delivery from Lompoc, three hours late.

As a benchmark, Nile provided a couple of Barolos from his personal cellar. In all, eight wines were blindly tasted and assessed by our redoubtable panel. Based on aggregate rank scoring, the results were as follows:

1) 2008 Palmina Nebbiolo Rocca Vineyard: A fruit-forward expression, with hints of tannin, this wine proved the overall favorite of the afternoon. As with all of Palmina’s selections, Steve Clifton’s restraint in releasing his Nebbiolos only when they are at their prime proved extremely admirable. 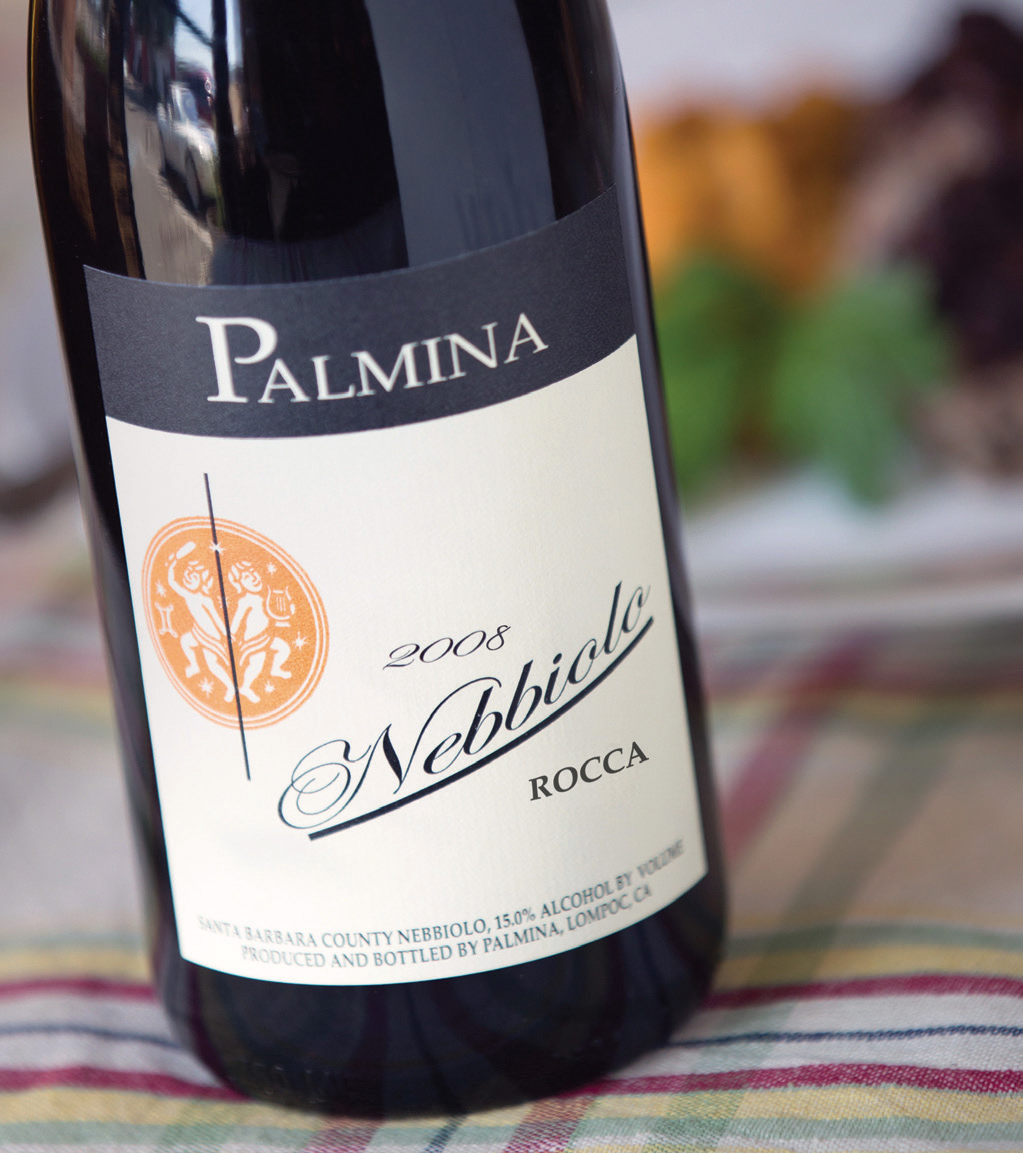 2) 2012 David Arthur Estate Nebbiolo: H0me field advantage? Only in that the rocky soil and hillside terroir that has proven so hospitable for Cabernet provides an equally-appealing stratum for the noble Piemontese grape. This slightly aromatic bottling, balanced at 14.9% alcohol (as was the Rocca), delivered a soft wine without any trace of astringency.

3) 2009 Castelli Estate Nebbiolo: Our panelists had rough consensus on this selection, a wine that clearly displayed Emilio’s facility with the grape. A pleasantly cherryish wine, with just a hint of sweetness to round it out.

4) 2008 Palmina Nebbiolo Honea Vineyard: A complex wine, to be sure. A powerful yet wondrous nose belied it honeyed tinge and remarkably soft finish. Slightly lower (14.5%) alcohol than Palmina’s other offerings here, balanced acidity, and the aura of food-friendliness.

5) 2011 Baroli Barolo: Decidedly mixed results. While the other panelist felt strongly about this wine, my California-focused palate was less sanguine about it. Notable strains of cherry flavor countered but a slight aromatic quality and its 14% alcohol

6) 2008 Palmina Nebbiolo Sisquoc Vineyard: Also less concurrence among us for Palmina’s third vineyard-specific entry. I initially felt rather tepid about this selection, but grew to appreciate its ever-so-slight sweetness with subsequent tastings.

7) 2011 Castelli Estate Nebbiolo: Consensus here was that this vintage fell short of the 2009. Both wines showed considerable restraint at 13.5% alcohol, but this later bottling seemed more tart than sweet, a tinge that may have proved more approachable with food.

8) 2011 Rocche Costamagna Barolo Rocche dell’Annunziata: Perhaps an unfair ranking, as this wine seemed to have turned. Interestingly, it bore the highest alcohol of the wines we sampled blindly.

Of course, this rather impromptu assembly of tasters and attentuated selection of wines would not bear scrutiny, compared the other aforementioned tastings. To accord more validity to our results, I independently tasted these eight wines at home, both with and without food pairings, along with two selections we had not included in St. Helena. To my surprise, both these latter wines superseded the bottlings we had tasted ensemble.

The 2013 David Arthur Estate Nebbiolo proved an astonishingly wonderful wine, far more full than its predessors, a lush, phenomenal expression of the grape at 14.7% alcohol. Yet as much as I cottoned to this selection, I clearly favored the 2011 Castelli Nebbiolo Luna Matta Vineyard. Unlike Emilio’s other offerings, this wine heralds from the Paso Robles vineyard maintained by fellow NEB member Stephy Terrizzi, who bottles under the Giornata label. At 14.4% alcohol, this wine displayed the same light elegance that had originally driven me to the Castelli label and truly validated my selection of these wines for this challenge. I can only imagine how both these wines might have skewed The Judgment of Piemonte, had they been included.

I suspect diehard Barolo devotees would not likely be swayed from their allegiance by the tenuous results of this session nor the local wines presented. But certainly even a tasting as narrowly focused as this refutes the monolithic prejudices many of the buyers I encounter and calls into question the acumen of the numerous sommeliers whose European bias could not be more palpable. The Judgment of Piemonte will be, I hope, a precursor to a more comprehensive tasting in the near future, one of many such events Sostevinobile plans to include in its upcoming repertoire.