One needn’t have taken 12 years of Latin, as did Your West Coast Oenophile, to interpret the Roman numeral subject of this, my latest blog post. The other night, I ambled out to explore a couple of San Francisco’s newest drinking establishments, both of which hold pertinence to my designs for Sostevinobile’s forthcoming brick & mortar operations. Obispo is a much-anticipated cocktail bar from the team that created Bar Agricole and True Normand in San Francisco. Five years in the making, it is both wildly ambitious and strikingly understated at the same time. As SF Eater notes, Obispo is Thad Vogler’s “most straightforward offering yet: a simple but effective bar celebrating rum, classic rum cocktails, and food from rum-producing regions.”

It’s admirable that a bar of this

caliber eschews the trend toward untenable pricing that would preclude most denizens of the Mission neighborhood where Obispo operates. On the other hand, printing its menus in Spanish seems to be pandering. But what most impresses here is that the authenticity of its cocktail menus, with its focus on the true rums of the Caribbean and their historical background, a culmination of Vogler’s meticulous scholarship on rum and distilled spirits, chronicled in his tome By the Smoke and the Smell.

I first met Thad while he was bartending for Charles Phan at his first non-Vietnamese venture, Heaven’s Dog. We bonded over mutual aspirations to open our first establishment—coincidentally, I had already toured but turned down the opportunity to lease the new redevelopment at 355 11th Street, which eventually became home to his debut venture—but what I found truly revelatory was the meticulous scholarship he employed in researching and developing his authority on rum and spirits, a skill he honed as a literature major at Yale. Having a couple of Ivy League literature degrees myself, I realized that if I undertook my research into West Coast viticulture with the same academic intensity as Thad’s, I could position myself in unique vantage within the wine industry. Ten years later, I am ready to put my theory to test.

From Obispo, I toddled over to Third Street to experience the newly-launched Ungrafted, the first large-scale wine bar to open in San Francisco in quite a few years. The brainchild of husband & wife sommeliers Chris Gaither and Rebecca Fineman, this split-level, 90-seat establishment is close, structurally, to what I have projected for the wine bar/restaurant portion of Sostevinobile. From this standpoint, I was duly impressed. The layout still felt cozy and intimate, like a small venue, but dynamic in a way the ubiquitous living room-style winebars can never quite achieve. Importantly, Ungrafted’s 20′ ceilings enabled wonderful acoustics, allowing for ease of conversation even with ambient music playing in the background.

As with Bar Agricole, I had also scoped out this sector of Dogpatch as a possible site, soon after the galleries at Minnesota Street Project had opened, but had felt the area was not sufficiently frequented to support my needs. Surprisingly, Ungrafted was fairly full this evening, with a decidedly mixed crowd, which I also took to be encouraging. But Ungrafted is a far different beast than Sostevinobile will be. As the wine program is handled by its two owners and operated by additional sommeliers as well, their by-the-glass program appears to be predominantly focused on food-pairing wines—quite suitable if you intend to dine there, difficult to swallow, if you had come merely to enjoy a glass on its own. I found myself sampling through three or four selections before settling on a compromise choice. Moreover, their paucity of California wines implicitly reflects the prevalent sommelier prejudice against our local offerings, while relying on such exotic-sounding labels as the 2016 Umathum Zweigelt/Blaüfrankisch/St. Laurent Rosé or the 2017 Heimann Kadarka Szekszárd to create the veneer of sophistication and depth.

Coincidentally, while inspecting their restroom facilities, I came across a hanging of the ever-ubiquitous De Long’s Wine Grape Varietal Table, a fabled chart that categorizes some 180 different grape varietals used for vinification, including non-vitis vinifera, like Delaware and Niagara. 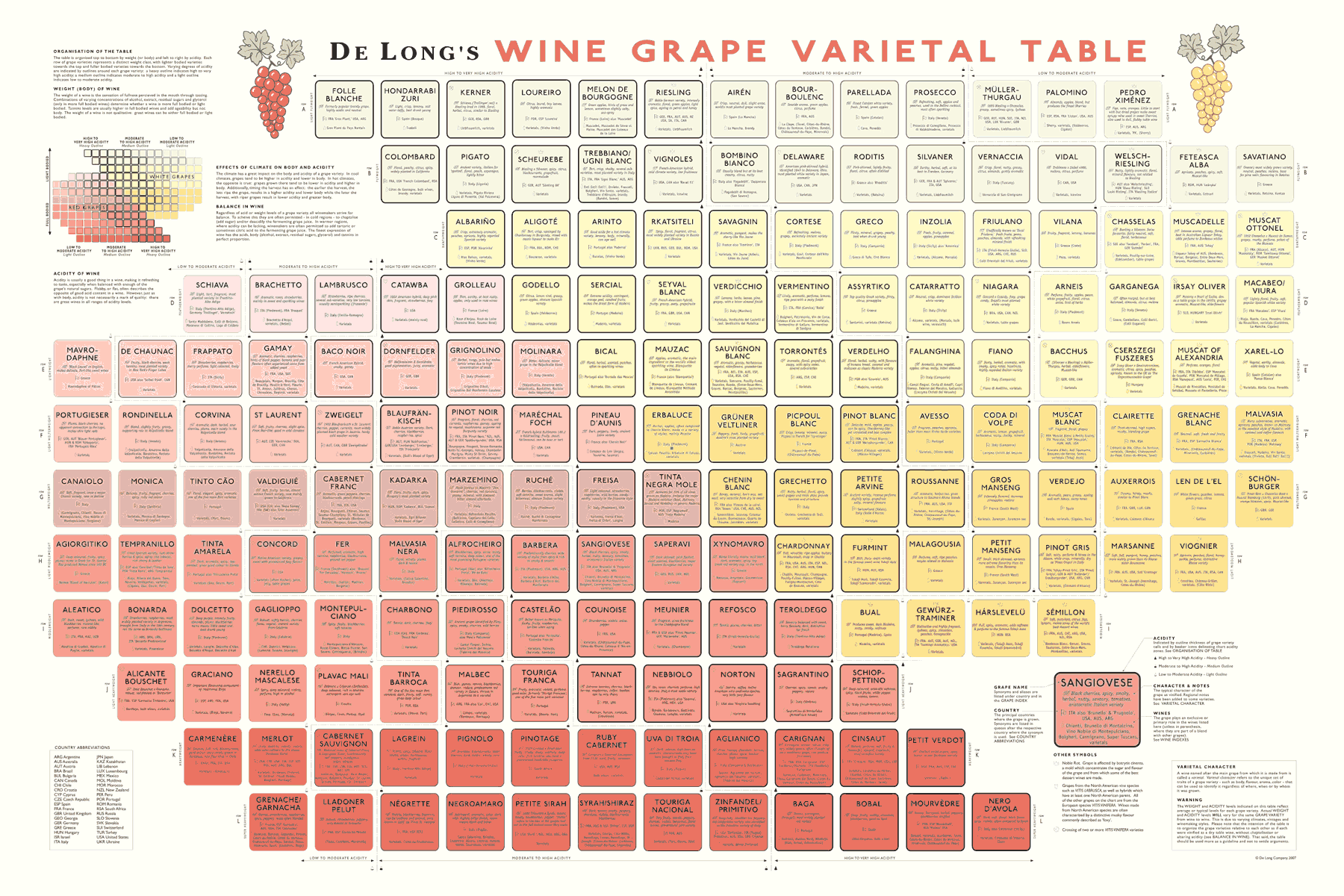 Idling myself for an inconsiderate length of time to read through this extensive, though hardly exhaustive list, I counted 118 grapes that I have sourced in wines produced in California, Washington, and Oregon. Plus, I could easily name another 40 or 50 varietals, originating from multiple regions in Georgia, Greece, Italy, France, Spain, Portugal, Germany, Austria, and Switzerland, not included on this chart that are currently in production here, with more cuttings being suitcased in every year.

As I have been promising for a decade, Sostevinobile will be featuring the most diverse selection of wines San Francisco has to offer, all from the 750-mile radius that defines our local, sustainable realm. I am looking forward to serving you there.

Your West Coast Oenophile did not own a television during my time in grad school. One wonders how, or even whether, Sostevinobile would have evolved if I had been able to watch Monday Night Football instead of reading Nikolai Gogol’s Dead Souls for Victor Terras’ Russian seminar. consequently, I didn’t hear of John Lennon’s murder that fateful evening until I got onto the elevator at Rockefeller Library.

Nonetheless, I still reflect on Lennon every December and hum tunes like Jealous Guy as I type. For sure, GenXers and Millennials will be familiar with The Beatles and their vast musical catalogue, together or separately. Few, I suspect, will know of John’s books like A Spaniard in the Works or In His Own Write. These books may seem a tad jejune at this stage—what 26-year-old writer wouldn’t?—but were considered avant-garde when they were published. A

memorable play on words, derived from one of the short stories in the latter volume, A Red Lettuce Day, is a term I have borrowed on multiple occasions.

And as December and 2018 drew to a close, such a day coalesced. For starters, my longheld desire to relaunch a trade association for local producers of Italian varietals is finally underway. Our organizational meeting for Risorgimento takes place in Healdsburg on January 27, and with some 676 wineries in our database so far, this promises to be quite a dynamic presence in the West Coast wine scene.

I am hoping that Risorgimento will be producing its first Grand Tasting, CalAsia 2019, for the trade and public later this year, especially now that I can offer this and any major wine organization a first-rate venue. Astute readers will recall that Sostevinobile and its partner, The Midway, hosted Family Winemaker of California Grand Tasting last August as our inaugural wine event. After setting up the Risorgimento launch, I fired off invites to over 95 trade organizations and wine distributors to produce their trade events with us. Responses have been trickling in ever since, and—sorry, Fort Mason—I feel confident that we will now have the premier destination for trade tastings in 2019.

And, of course, I am cautiously optimistic that, at long last, Sostevinobile will be launching San Francisco’s premier wine bar in late 2019 at our soon-to-be-revealed NOPA destination. The past year had seen much frustration in negotiating a deal for our three-story building with our angel backer, but, with a successful phone conference this same Red Lettuce Day, we are back to sitting at the table and ironing out parameters.

I shudder to think it has take me close to a decade finally to get this massive project underway, but the prolonged process has had its benefits. Our databank now includes some 4,256 sustainable wine producers on the West Coast, encompassing well over 150 distinct varietals, plus a vast selection of blends, Meritages, fortified and sparkling wines. Plus, the new premises and design will allow us to include a full retail shop and Club SVN, a members-only salon and wine club for serious wine aficionados—details forthcoming.

And then, of course, there is this little deal in China I have going…