My readers know that Your West Coast Oenophile holds very strictly to a core sense of æsthetics and propriety. If not, Sostevinobile might well land up a paltry rendition of TGIFridays. Or worse.This resolve explains why I have not owned or operated any of the execrable software Microsoft publishes since 1989. Or why, apart from the pressing needs of a turgid bladder, I have not set foot in a McDonald’s since 1975.

It isn’t simply an abhorrence of their culinary atrocities that propels me to eschew the Golden Arches. In my view, McDonald’s embodies everything that is wrong with America, and as we slough through this modern era with its fast food-fueled Presidency, it only grows truer.

In a similar vein, of course, I have long held an unabated disdain for the perceived cultural abyss that demarcates the technological expanse to the south of San Francisco. Even now, as a newly-minted member of the California National Party, my arguments championing independence for our nation-state, are based not only on our economic prowess but the distinct identity of the Golden State (not withstanding Sostevinobile’s focus on wines from the West Coast, which reflects my contention that the expanse from British Columbia to Baja is an indivisible continuum of California’s viticultural sway), yet I have remained remarkably loath to embrace 408-land as an inextricable part of our landscape.

In truth, I am far from unwavering in asserting my belief in the supremacy of Californian culture. After all, we still cling atavistically to the barbarism of the death penalty. Our contributions (Herbert Hoover, Richard Nixon, Ronald Reagan) to the confines of 1600 Pennsylvania Avenue hardly represent the zenith of Presidential politics, and unfortunately California deserves full credit that most unholy of institutions: the No Host Bar. Nonetheless, I am discovering aspects of Silicon Valley that actually warrant my admiration.

Many times here, I have extolled the viticultural virtues of wineries like Ridge, Kathryn Kennedy, David Bruce, Michael Martella, Rhys, Bonnie Doon, Big Basin, and Thomas Fogarty, to name but a few. Indeed, the non-technologically focused west side of Santa Clara County, as it melds into Santa Cruz, retains much of the agrarian charm and rural beauty that defined Silicon Valley before computer technologies dominated the region. And even as the valley strives to 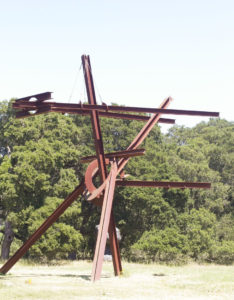 encroach upon San Francisco—sorry, Anjou Ahlborn Kay, but we will never become its adjunct—the west side of I-280 remains a pristine preserve, with its reservoirs and preserves. Earlier this summer, I returned to privately-held Runnymede Sculpture Farm in Woodside for the 3rd annual holding of  Silicon Valley Wine Auction This estate, of course, is a dazzling testament to what one can achieve with a billion dollar inheritance, featuring dozens of outdoor works from Andy Goldsworthy, David Kraisler, Raul Baeza, Brian Wheeler, Sam Perry, Mark di Suvero, Keith Haring, Robert Arneson, and many others.

The event brings together a dazzling array of wineries from the Santa Cruz Mountains AVA and does as much to promote the quality of these wines to a well-heeled crowd that may or may not realize the abundance that can be found in their own backyard as it endows the Silicon Valley Educational Foundation, the beneficiary of this extravaganza. The combination of wine, superb catering, world-class art, and a stunning rural backdrop cast Silicon Valley in a whole new light, a radical departure from the concrete box architecture, sterile corporate campuses, and monolithic culture that comprises the vast stretch of cutting-edge technology from Sunnyclara and Santavale to Cupertoga and Saravale. As I joked with one of the promoters, the one utterance that was never heard throughout the weekend was “I miss Levi’s Stadium, the soulless rectangular edifice, designed with all the precision and allure of a circuit board, that housed the first two years of this auction.

I had tried to secure Runnymede for the wine tasting I produced this past April, an assemblage of 30 wineries from around the state owned or operated by alumni of Dartmouth College, the venerable institute where I had obtained my degree in Classical Languages and in Creative Writing. Other venues we considered bordered on the ludicrous—Rosewood Hotel wanted $40 corkage for each bottle poured at the event on top of their rental fee. After a considerable search that extend as far north as San Mateo, we finally settled on the Quadrus Conference Center, across from the Stanford golf course. Virtually seven years to the date, the Bay Area’s inaugural Paso Robles Wine Country Grand Tasting, took place at this understated venue nestled amid the leading venture capital firms. I not only attended but chronicled the event in a lengthy post here, and while I retained fond recollections of the wines, as well as an in-depth conversation with Tablas Creek’s Tommy Oldre after the tasting concluded, I somehow had managed to blank out any memory of the venue until I inadvertently perused my notes from 2010 a few hours before heading down to Menlo Park. N’importa, with perfect weather throughout the afternoon, Quadrus proved an enormously memorable venue, with breathtaking vistas spanning the southern tip of the San Francisco Bay and the Cargill salt ponds, the entire span of the Dumbarton Bridge, and, off in the distance, Mt. Diablo’s majestic peak. A more soothing and splendid backdrop could not be found.

I suppose it would have been utterly splendid to depart the Sand Hill Road complex offer sheet for Sostevinobile in hand, but alas, with the regrettably tenuous attendance meant this was not in the cards. Still, not long thereafter, I attended an innovative convergence of the Silicon Valley financeers and pioneers in the emergent agricultural realm. One World Training & Investments produced an unprecedented gathering entitled HACKING FOOD: Silicon Valley’s Sustainable Food Festival at BootUp, an unheralded incubator in Menlo Park. This was not a typical foray into Agtech investment, which currently seems is dominated by speculators in the new Gold Rush: legal cannabis. Rather, this conference focused on entrepreneurial opportunities in sustainable food production, along with new efficiencies in distribution and other attendant technologies.

Here was a side of Silicon Valley rarely seen: investors focused not on the Next Big Thing nor a 20X return on investment IPO, but innovations designed to further access to nutrition and promote the health of the planet. Tangible good, instead of technological progress for progress’ sake. It was the kind of commitment that made even this Silicon Valley skeptic take pause.