For the past three years, Your West Coast Oenophile has roared into January, intent on starting out the New Year with reinvigorated resolve toward Sostevinobile, including diligent attention to this blog that has kept us vibrant in the public eye for several years running. And the, like clockwork, BOOM! I inexplicably get waylaid by an opportunistic infection that sets me back for weeks. And so 2018 found me as the unanticipated guest at Lompoc Valley Medical Center. a community-funded facility adjacent to Lompoc’s understated Wine Ghettto, the home of such esteemed labels as Palmina, Flying Goat Cellars, Holus Bolus, Moretti, Montemar, and Domaine de la Côte. 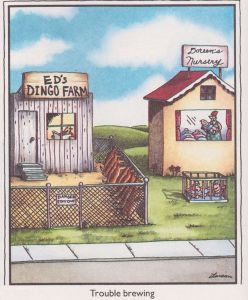 Being confined with Draconian dietary restrictions, while gazing out my window at this cornucopia of elite vinification, felt much like the classic Far Side panel. Worse, the food I was permitted—does anyone under 40 even know what Salisbury Steak is?— came from a chef whose culinary tutelage apparently took place at Swanson Frozen Foods, circa 1962. Was this some form of divine retribution for my attempts launch Château Lompoc (The Wine Served Behind the Finest Bars in America) oh-so-long ago? Suffice it to say that the inmates at Club Fed were dining in luxury compared to my daily allotment.

But truly I am grateful for the exacting medical treatment and therapy that allowed me to stroll out on my own power, intact with ten toes, and able to complete my recovery back in San Francisco, two belt notches slimmer for the wear & tear. And while I have finally reached the point where I feel am physically past all the residual effects of this setback, the backlog of work it has created is just beginning to clear.

Obviously, this blog has endured great neglect, though not for lack of effort. Many times over the past several months, I took out my tasting notes, sat down before my MacBook Plus, opened WordPress, and started a new post, only to be overcome with fatigue—or worse, a realization that what I had intended to write had missed its window for relevance.

Which is not to say that my attendance at the Los Carneros Pinot Noir Tasting ZinEx, Garagiste Southern Exposure (Solvang), First Taste Yountville, Coombsville Vintners & Growers, Auberge du Soleil’s Friends & Neighbors, Women Winemakers, 750 Winemaker Studio Tasting, Atelier Melka, Spring Mountain, the Wineries of Wheeler Farms, Première Begins at Oakville, San Francisco Vintners Market, Taste of Mendocino, the amazing California lineup at Slow Wine, A16’s Festà della Donna, and the Santa Cruz Mountain Winegrowers’ April Passport was mere an exercise in imbibition. Even though I may attend many of these events through my media credentials, my purpose has always been multifold, Besides the observations I sporadically record in this blog, I have always been methodically building the most extensive database of West Coast wines in order to create an inventory of unparalleled breadth and quality for Sostevinobile; towards that end, I have managed, even with my medical hurdles, to record a dozen or so uncharted varietals and close to two hundred new wine labels already this year.

Secondly, over the past few years, I have used forays and explorations to create new wine events, and I am pleased to announce that this summer I will be producing CalAsia 2018, the first comprehensive tasting of Asian American/Asian-owned wineries in California. Furthermore, my partners in this undertaking and I are establishing a new venue for professional and public wine tastings throughout the year, and hope shortly to announce a second major tasting event—one that will be familiar to most readers here—also this August.

And if that weren’t enough, I am now in the process having having a brick & mortar space in San Francisco procured for Sostevinobile. This expansive edifice stands at over 2½ times the square footage I had targeted for my wine bar/restaurant/retail store and remarkably contains an entire floor that has already been extravagantly developed. This, in turn, allows me also to launch a members-only wine club within the facility, with lounge space, meeting rooms, private dining, a Reserve List wine bar, individual storage lockers, and a personal concierge for wine purchases, tours, and other amenities.

Little wonder I have had little time left to write. But as these developments come to fruition, the keys on my keyboard will be flying…