We all have a litany of what if?s in our lives. Your West Coast Oenophile could enumerate many, some related to Sostevinobile, others on a more personal level. Should I have stayed with my original plan to develop my own wine label? Would I have been better off going to a school like Yale? Or majoring in math, as i was recruited to do?  Where would I be now if I had driven west to Los Angeles instead of San Francisco? Or if my avant-garde satire on the 1980s, The Last Sharper Image Catalogue, had found an enthusiastic publisher? And what might life have led us if a certain special woman and I had ever connected romantically?

We have seen each other only sporadically over the intervening decades but, of late, have been intermittently communicating via that emotionally sterile modality of the 21st Century: the text message. With no ostensible agenda beyond staying in touch. Just because. 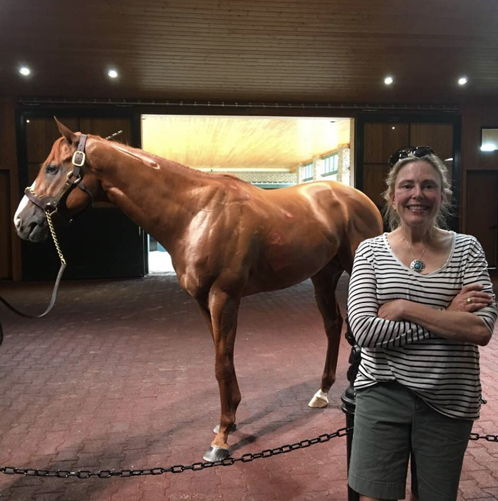 Many years ago we tried to set up her little brother with my little sister. It was quaint and charming and felt rather adult on our part, but not patronizingly so. I’m no0t sure whether Jill and Elliott ever connected after that New York luncheon, but she now lives in London, while he runs horse breeding operations back in Kentucky. One of his stallions has had a modicum of success this past year. And even though horse racing fans tend to favor bourbon over the grape, I’m pretty certain most of my readers will be familiar with Justify.

This August also constituted a Trifecta of sorts for Sostevinobile. The dictate of fundraising for what will now be a 26,000+ sq.ft. complex require that I engage in a host of wine-related endeavors. So far, these side ventures have entailed everything from grape brokerage to label development to event production to my former wine-related profession, Mergers & Acquisitions. Plus, along the way, I quietly help out other wine ventures with advice and connecting them to any number of people with whom I work, both inside and out of the industry.

Granted, my role was quite minimal in assisting Carlo Anthony Niboli with the debut of his Cabfest, but I was pleased to attend this tasting on both Saturday and Sunday to consult and critique. The lobby beneath the dome at Westfield Center portended to be a challenging setting for an event of this scope; surprisingly, even with throngs of shoppers filling the mall and its restaurant courts. More impressive was the breadth of wineries on hand, from an array of Napa stalwarts like Oakville East and Raymond to a panoply of Paso Robles’ emerging Cabernet stars, including Calcareous and Justin, along with Sonoma’s much-acclaimed Bellacosa. the generational successor to Glen Ellen’s B.R. Cohn.

The music ranged from a smaltzy 1920s Toppman Trio on Saturday, courtesy of the event’s co-sponsor Speakeasy SF, to a most alluring avant-garde violinist, Shaina Evoniuk. Normally, I would have expected live performances to overwhelm the audibility of the venue, but here they provided an unobtrusive ambient backdrop to the tasting. One also would have expected a new event like CabFest to provide rather lackluster catering—of which even the most establish events are frequently guilty—but the generous smorgasbord was complimented by superb hors d’œuvres from the venerable Morton’s The Steakhouse. along with utterly delectable baked goods from Best of Friends Cookies, a Fresno concession run by Carlo’s pixieish mother Debbie.

To be candid, I had vested interest not only in seeing CabFest succeed but to see it expand beyond the capacity of this Westfield setting. But a more salient reason, perhaps, is that the Bay Area no longer plays host to any annual Grand Tasting that focuses on Cabernet Sauvignmon. In San Francisco, Pinot Noir events like Pinot Fest and Pinot Days abound. Sonoma holds its annual Pinot on the River each October and has revived the cutting-edge West of West celebration. Santa Cruz has its Pinot Paradise and Anderson Valley holds its Pinot celebration every May. Nothing of similar scale displays the regionality and versatility of Cabernet. If I can help elevate CabFest to the pinnacle once held by the California Cabernet Society, my task will have been complete.

As previously mentioned in this column, Sostevinobile is now collaborating with The Midway to host trade tastings in San Francisco. On August 26, we inaugurated this venture with the 28th Annual Grand Tasting of Family Winemakers. My hope had been to launch this program with CalAsia 2018, a Grand Tasting of the 82+ Asian-American/Asian owned wineries in California, but my previous health predicament this past winter proved too much of a setback for me to rebound  insufficient time to organize an event of this scope. Nonetheless, the Family Winemakers tasting  marked an auspicious debut for us, as well as an instrumental learning curve, and I look forward to sustaining a long an  prosperous relationship with this organization that has been a pivotal component in building the Sostevinobile wine program.

Stay tuned as I commence organizing CalAsia for January 2019.

Another of the many hats I wear on behalf of Sostevinobile has been the revival of the winery M&A practice in which I was occupied through most of the 1980s. While it has not proven the most lucrative of my current endeavors, it admittedly still fascinates me. And so I uncharacteristically awoke before 7:30 AM to join several of the industry’s most prominent practitioners at the North Bay Business Journals annual Impact Napa conference. These gatherings have always proved most informative, and following a field report from Clay Gregory, president and CEO of Visit Napa Valley, on last year’s fires’ impact on tourism, the audience was treated to an extraordinary glimpse into the philosophy of Christian Moueix, the legendary proprietor both Yountville’s highly acclaimed Dominus Estate and a portfolio of French domaines that includes Pomerol’s Château Pétrus.

It would not be overstatement to note that Moueix lives in a rarfied realm. Pétrus just sold a 20% stake in its business for ~$232 MM, making it the most valuable winery in the world. His support of Napa’s recent Proposition C—whose architects Dennis Groth and Andy Beckstoffer were also in attendance—also begs a certain privilege, as raising the threshold for new wineries to a 40-acre minimum would preclude all would-be viticultural entrepreneurs save for an extreme wealthy few. But Moueix’ for such austere measures as this or letting uprooted vineyards lie fallow for 4-5 years before replanting stems from conscientious environmental stewardship of his many properties and an unshakable belief in the need to protect delicate watersheds and aquifers here and in Bordeaux, as climate change continues to make water an endangered commodity. A man who spends three hours each morning in his vineyards and has never missed a communal dinner with his workers, his position and passion are ultimately laudable.

The final segment of this conference was essentially a primer on the spectrum of investment profiles throughout the wine industry. Panelists included Richard Mendelson, a Napa attorney and Merger specialist who earlier had interviewed Moueix, Carol Collison from Global Wine Partners, and Sean Maher of Aspect Consumer Partners. The latter two specialists have long been familiar to me through potential deals on which we have engaged, but it was a particular treat to see Sean bring along his father, Dick Maher, who had counseled me some 35 years ago.

Though this trio’s experience was long and deep, with successes I could only envy, their message ultimately restated what has long been obvious. Many of the wineries today, especially those that have not been annexed by corporate or industry behemoths, stand potentially. if not actively, ripe for acquisition—to wit, the sale of Stony Hill to Long Meadow Ranch but a few days before the conference. But credible, committed buyers remain a rare breed, as my Rolodex will attest. But, as is often the case, when one door closes, another opens.

And so funding for Sostevinobile may be coming from elsewhere, but not as far removed as one may think…

Admittedly, Your West Coast Oenophile goes through prolonged bouts of not posting anything on Sostevinobile’s pages here (as well as on our website or on Facebook). It not that I’m not writing anything—I have many, many times sketched and researched and started to compose new posts, only to be sidetracked by my duties in the wine field and finding myself too exhausted to complete them. Such is fate.

Perhaps I should take a page from Paul McCartney, who famously forged together strings of unfinished songs and managed to get away with it because, well, he’s Paul McCartney. Of course, that only worked while he was a Beatle. Then he formed Wings…