Contrary to what many may have believed back in the day, marijuana was never the vice of choice for Your West Coast Oenophile. Not that I didn’t occasionally indulge during my boarding school and college days; it’s just that it always made me tired and, frankly, was quite harsh on the lungs. In edible form, the experience was far more pleasant, though it didn’t exactly enhance the flavor of brownies. Or caramel. Recently, however, I inadvertently tried a cannabis gummy with 10 mg. THC. Tasty, yes, but as for the effects… 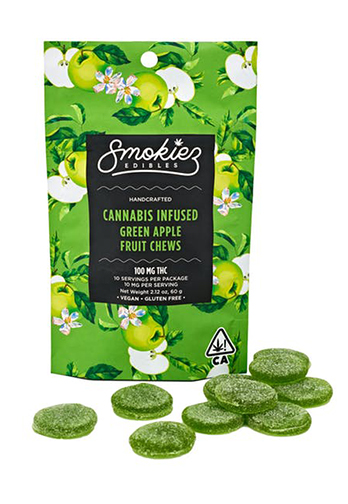 I don’t know whether my friend mentioned it was infused when she offered me a “candy” or if  I wasn’t paying attention. Shortly thereafter, we took off on a shopping expedition, in search of the shrimp and oysters I needed for my Cajun pasta specialty. We combed the seafood and produce markets throughout the Inner Richmond portion of Clement Street, arguably the best food shopping district in San Francisco (even if their prices for Dungeness crab remain extraordinarily inflated this season). As per usual, New May Wah Supermarket amply met our needs and then some, filling our bags with an assortment of Korean pears, star apples, and other exotic fruits.

From there we ventured to the in-store pharmacy at the nearby Lucky’s, where I get my prescription for “rejuvenating pills” filled. Normally, this would be a two-minute stop, but a glitch with my new insurance turned it into an excruciatingly long excursion. As I waited for the druggist to resolve the computer issues, it seemed like things were getting blurry, while mu head started throbbing the way it typically does when I stand for any prolonged period under fluorescent lighting. Only the lighting here wasn’t fluorescent.

I tried to shrug it off and figured I would feel OK once I left the store—my usual remedy in these situations. But the fogginess only grew stronger. The drive back to my flat seemed interminable. I knew where I was heading and had little issue with operating my vehicle, but the 10-block route back to Lower Pacific Heights seemed to go on for miles. Inside, I struggled to see clearly—why couldn’t the dimmer switch turn up full? Becoming exceedingly irritable, I came close to shouting at my companion for crowding me, or so it seemed, in the kitchen as prepped the sauce and cranked out the angel hair noodles on my Atlas pasta maker.

How I completed this undertaking remains a mystery to me still. I coated the pan with olive oil, instead of butter, compelling me to start the sauce from scratch once again. Next I managed to sauté the garlic and onions far too long, browning the slivers beyond the point of palatability. I overcooked the shrimp and nearly forgot to stir  in the spices I had meticulously blended beforehand. Worst of all, my pasta dough refused to congeal easily; I landed up with mounds of fragmented 3″ strands, instead of elegant, attenuated noodles that I anticipated rolling out.

The meal would never have passed muster in a fine dining establishment, but my guest seemed indifferent to its flaws, perhaps on account of over  2½ bottles of wine that we polished off throughout the dinner. Whatever got us through the meal, we eventually had our fill and toddled off to bed.

In the morning, I felt no worse for the wear and even managed to brew an artful pot of coffee while fixing a couple bowls of instant oatmeal. Over the course of breakfast, I mentioned how weird I had felt that evening and apologized for having been so testy. “It was probably the cannabis gummy I gave you,” she proffered. And thus, it all came into focus—in a manner of speaking.

But here’s the takeaway from this episode. Even if I had knowingly ingested this dose of THC, I would not have enjoyed the experience. The effects were not relaxing. I was disoriented at a level I experience when greatly overindulging with wine or with cocktails, not the pleasant yet coherent mood alteration a glass or two may bring. And the effect was not gradual or immediate; rather, it crept up on me unexpectedly after considerable delay (the packaging, which I subsequently read, advises that the THC may not take effect until two hours after it is consumed), then hit me full-force

In other words, cannabis does not portend to displace the consumption of wine. The conviviality of imbibing, the relaxation of one’s mood, and the sheer magic of wine’s interaction with food is not replicated with this alternative intoxicant. Neo-Prohibitionists, vegan chauvinists, health pseudoscientists, and Juul-puffing Millennial poseurs foreshadowing the demise of alcohol be damned—the grape is here to stay! And Sostevinobile vows to remain resolute in our original vision of the most comprehensive venue for sustainable wines from the West Coast.

Happily, Your West Coast Oenophile is still in business, having surmounted the series of setbacks that nearly sent Sostevinobile to the dustbin of history last fall. I am starting off 2020 with renewed optimism, having (potentially) revived not only the NOPA site for our long-delayed brick & mortar operations but the overseas financial deal on which our funding depends. Also, I am looking forward to reinvigorating Risorgimento, the Italian varietal trade organization we launched last year. And I have put in motion two new wine projects I hope to discuss here later.

But first let me start off this new decade with a reflection on my top wine from 2019. If only Valley of the Moon’s 1999 Sangiovese were still available, I’d be tempted buy out the entire stock. But when the current ownership, which operates Quails’ Gate Winery in Kelowna, British Columbia took possession of the Madrone Estate facility in Glen Ellen, they relinquished rights to any of the wines formerly produced under the original Valley of the Moon Label that predated Madrone. As such, my sampling was a one-time-only treat.

Still, my one-ounce pour easily rated a Too Good to Sip & Spit—and a slow, deliberate sip at that. The wine proved remarkable for a number of reasons. Normally, I wouldn’t consider Sangiovese a wine that would be ageable beyond a decade, especially if it hasn’t been blended as a SuperTuscan, but, here, 20 years later, this bottling was still hitting its stride, with nary of a hint of having peaked. Moreover, Sangiovese in California was still struggling to find its expression in the 1990s; I can’t recall a memorable vintage before Piero Antinori’s 2000 Reserve Sangiovese  from his original plantings at Atlas Peak.

Back in the 1990s I would have looked to Imagery or Viansa for Italian varietals in this corner of Sonoma County. To have found a Sangiovese this complex then from Valley of the Moon would have been serendipitous; twenty years later, this wine proved a revelation.