Sostevinobile has been affiliated with the Slow Food movement since our launch, but it was not without a degree of trepidation that Your West Coast Oenophile set out to attend the Slow Wine Tour at Pier 27 earlier this week. Initially, this wine tasting was incorporated as part of Slow Food’s annual extravaganza at Fort Mason that featured virtually every Italian restaurant in San Francisco. The first few years, only Italian wines were featured—not surprising, since Slow Food’s San Francisco founder, Lorenzo Scarpone, runs Villa Italia, a premier wine importer in South San Francisco. Eventually, however, the wines of Mendocino County, which bills itself as America’s Greenest AVA, were also included. 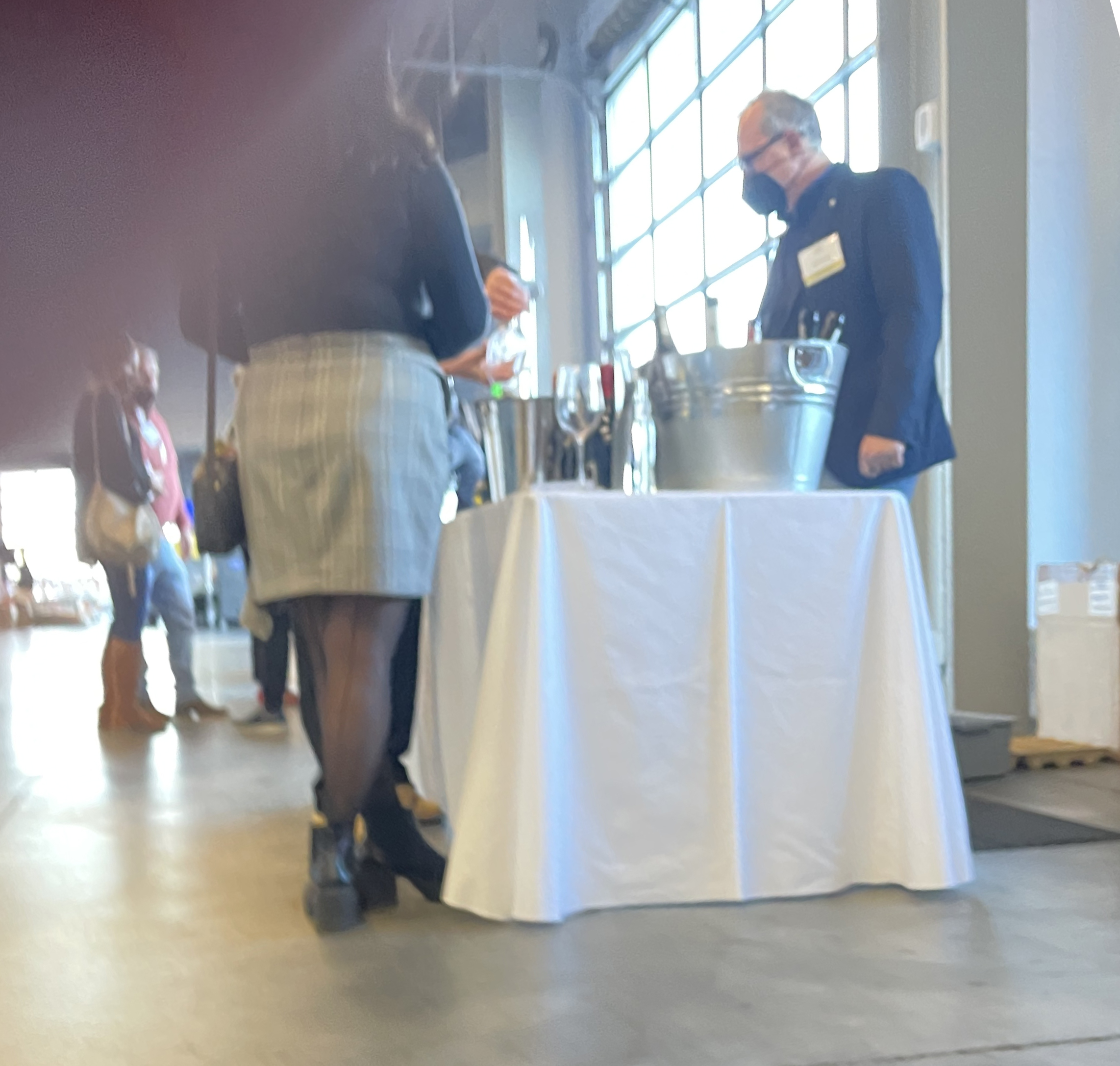 I was quite surprised that The Slow Wine Tour held to its January schedule. ZinEx, Union des Grand Crus de Bordeaux, and others decided to postpone their tastings scheduled for this week, due to the Omicron surge. I resolved to give this event a whirl provisionally, determined that if the expansive ground level at Pier 27 felt even slightly congested, I would forego the event until 2023. But with only moderate attendance and ample ventilation through the opened garage doors, I deemed it safe enough for a limited visit.

Rather than trying to undertake the entire lineup of 102 vendors, I held to the parameters established for Sostevinobile and restricted my samplings only to the ample selection of West Coast wineries on hand this afternoon. Conveniently, Slow Wine placed the tables from California, Oregon, and Washington at the end of the numeric roster, so it was easy to migrate sequentially, pace myself accordingly, and take ample notes. And it was a particular pleasure to start my tasting with Angwin’s Adamvs, one of Philippe Melka’s standout projects. Around this time of year, I relish the annual Atelier Melka Tasting at Première Napa, but sadly it will not be taking place in 2022. Here, along the Embarcadero, I could not have been more impressed with the two wines Adamvs poured, both Cabernets: their 2016 Téres, a deft blend of 90% Cabernet Sauvignon, 6% Merlot, and 4% Cabernet Franc, alongside their flawless 2016 Quintvs, an exquisite pure expression of the varietal.

At the next table, organic wine pioneers Bonterra represented a continuum from Slow Wine’s Mendocino beginnings. Here they ably showcased the versatility of their viticulture with their 2020 The Roost, a biodynamic Chardonnay from their Blue Heron Vineyard, alongside the 2019 The Butler, a Rhône-style blend of Petite Sirah, Syrah and Grenache. Also included, for comparison, the 2016 The Butler, a library selection. Moving on, another storied Howell Mountain winery, Burgess, now part of the burgeoning Demeine Estates empire, featured a trio of wines from their previous incarnation. The 2014 Mountaineer proved an amiable blend of 46% Syrah, 43% Cabernet Sauvignon, 8% Petit Verdot, and 3% Petite Sirah. A slightly more orthodox blend, the 2016 Contadina Cabernet Sauvignon, absent the more frequently incorporated Merlot and Cabernet Franc, rounded out the varietal with both Petit Verdot and Malbec, while the 2014 Cabernet Sauvignon Hillside Vineyards clearly rose to the top.

Another conspicuous absence from this year’s Première Napa will be the popular Bottle Party at Cliff Lede. From their Mendocino vineyards, the 2019 FEL Chardonnay Anderson Valley exemplified how this AVA has grown into one of California’s premier Burgundian regions, but my preference still leaned toward Cliff’s Napa selections, the 2016 Cabernet Sauvignon Stags Leap District and the utterly superb 2018 Cabernet Sauvignon Stags Leap District Magic Nights. Showcasing another exemplary locale for Burgundy varietals, Carneros, Donum Estate, the former domain of the lustrous Anne Moller-Racke, comported itself admirably with three expressions of Pinot: the 2020 Rosé of Pinot Noir, a superb 2019 Pinot Noir Three Hills Vineyard, and the 2019 Pinot Noir White Barn Single Block Reserve, an Editors’ Top Selection.

From Camino in the Sierra Foothills, Edio, the homegrown label from Delfino Farms, offered a refreshing line up of their 2020 Albariño El Dorado County, the 2019 Grenache El Dorado County, and a delightfully Mourvèdre-focused GSM, the 2019 Frank’s Rhone Blend. From Edio Delfino to Ettore Biraghi—wines just seem to taste better with a strong Italian name behind the label! This eponymous label is a new Mendocino venture from this pioneering vintner, whose Purovino® certification exceeds the non-additive strictures of the Natural Wine Movement. Here, at the Slow Wine Tour, this sulfite-free technique shone through in the 2018 Chardonnay Pure and the striking 2018 Chardonnay Reserve. Underscoring this all-organic lineup: the delightful 2018 Cabernet Sauvignon Signature, handpicked from Hopland’s Sanel Valley Vineyards.

Even before COVID struck, my efforts to visit Hamel Family Wines new Valley of the Moon facility were thwarted by an appointment-only policy. Allora, this obstacle will now be surmounted, but, in the interim, I greatly enjoyed the biodynamic wines poured here, starting with their excellent Bordeaux blend, the 2018 Isthmus. Far less of a tongue-twister, yet as appealing on the palate, their two reserve proprietary Cabernets: the 2017 Nuns Canyon Vineyard and the 2017 Hamel Family Ranch. Not long before COVID, I was able to snag a reservation at Saratoga’s prestigious Mount Eden, where I spent a wondrous afternoon sipping and sampling with Proprietor Jeff Patterson. Here, in a more objective milieu, the wines proved even more enticing, starting with a quite respectable 2017 Estate Bottled Pinot Noir. The 2017 Estate Bottled Chardonnay showed even more impeccable, but the 2016 Estate Bottled Cabernet Sauvignon was virtually flawless, a paean to the extraordinary expressions of this grape found within this coveted sector of the Santa Cruz Mountains AVA.

I am also an unabashed fan of Mendocino’s Roederer Estate, so was extremely pleased to taste with Domaine Anderson, their still wine adjunct in Mendocino. As you might expect from a sparkling wine producer, their three wines focused on Champagne grapes: the 2018 Estate Chardonnay, the 2018 Estate Pinot Noir,  and the single vineyard 2018 Pinot Noir Dach Vineyard. If only they had bottled a Pinot Meunier, as well! Just below Mendocino, Geyserville’s Sei Querce is a relative newcomer to the winery realm (although they have been growing Bordeaux varietals since 2010). Their 2019 Sauvignon Ranch House made for an auspicious debut, but a pair of Cabernets , made under the tutelage of star winemaker Jesse Katz,  the 2016 Cabernet Sauvignon Six Oaks and the splendid 2015 Cabernet Sauvignon Ranch House, proved exemplary. An added treat: their new First Edition Vermouth, an exceptional aromatic wine blending Sauvignon Blanc, Sauvignon Musqué, Sémillon and Viognier.

Postmodern winemaker Clark Smith, who helped found R. H. Phillips when it was a lonely outpost in Yolo County, brought the eclectic selections of his current label, WineSmith. Though based in Santa Rosa, Smith seems quite peripatetic, sourcing his 2017 Sparkling Grenache Brut Zero from Santa Cruz, a 2019 Tempranillo Tejada Vineyard from Lake County, and an interesting yet lackluster 2014 Meritage Ishi Pishi Vineyard from northern Humboldt County. Reaching out above the Emerald Triangle, Oregon’s Left Coast Estate made the trek to San Francisco to impress with their de rigueur selections: the 2019 Chardonnay Truffle Hill, the 2016 Pinot Noir Truffle Hill, and a superb 2018 Pinot Noir Cali’s Cuvée. Their standout, however, was the painstakingly-produced 2020 Estate White Pinot Noir, an exceptional example of this rare vinification.

Former Rubicon sommelier Larry Stone’s Lingua Franca similarly offered a Burgundian take on Oregon, with its own inimitable flair: a wondrous 2019 Avni Chardonnay, their 2018 Avni Pinot Noir, and the decidedly more complex 2017 Estate Pinot Noir. Likewise, Hillsboro’s Ruby Vineyard poured a pair of Pinots, the 2018 Laurelwood Blend Pinot Noir and the
2017 Flora’s Reserve Pinot Noir, alongside their unadorned 2018 Chardonnay. If pressed to choose, I think that Winderlea stood out in this niche, not just for the their 2018 Chardonnay, but with a trio of noteworthy Pinots: the 2017 Imprint Pinot Noir, the 2017 Legacy Pinot Noir, and the unassuming yet wondrous 2017 Pinot Noir Winderlea Vineyard.

Despite this uniformity, Oregon viticulture is hardly monolithic, as Cornerstone’s former President Craig Camp displayed here with his current project, the biodynamic- and regenerative-certified Troon Vineyard. Their 2019 Estate Syrah Kubli Bench was a most welcome bottling, while the 2020 Estate Vermentino Kubli Bench fit the overall Italian nature of the Slow Wine exquisitely. But their œnological prowess was truly on display with the 2020 Kubli Bench Amber, a most memorable orange (skin-contact) blend of Riesling, Vermentino, and Viognier. In fact so good, I had to take a bottle home!

Not to be downplayed, Washington did have representation here, a rare public tasting of the highly-acclaimed Cayuse Vineyards, with their splendidly-named 2018 God Only Knows Grenache, the 2019 Impulsivo Tempranillo, and an ungodly great 2018 Horsepower Syrah.

In other years,I might have remained at Pier 27 and cherry-picked my way through the various Italian tenute on hand. But even being triply-vaccinated,  was wary about potential exposure to this pernicious Omicron variant. Still, if anything can kill a Covid virus, it would undoubtedly be grappa, and so before leaving, I sampled through the four selections Venetian distillery Andrea Da Ponte poured: the Unica Da Ponte 2011, Vecchia Grappa di Prosecco, their Uve Bianche,
and the Fine Grappa Italiana. So far, nary even a sniffle!