Your West Coast Oenophile is somewhat reluctant ever to plug a retail wine operation—after all, this represents a large part of what Sostevinobile hopes to be doing as the pre-eminent purveyor of wines of the North American Pacific Coast. But the pandemic caused a radical reconfiguration  of my business objectives, and while we seem finally vack to a semblance of normalcy, it’s still impossible to assess the new terrain of San Francisco objectively. And so many of the mechanisms I devised in order to cope with the constraints of COVID restrictions remain ingrained in my weekly routine.

Granted, I have enough wine on hand to coast through a year or more without purchasing a bottle, but a $60 or $70 wine needs to be shard, not consumed in solitary isolation. And with that in mind—coupled by a long-standing inability to visit wineries and utilize my trade discount—I soon discovered the wonders of Grocery Outlet Bargain Market. In the past, of course, I’ve brokered sales of surplus inventory to this outfit, but I had not previously experienced them as a customer. I anticipated they would somewhat of grocery equivalent to Ross Dress for Less or  Smart & Final, and, to a large extent, this analogy bears true. 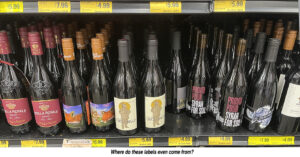 On the other, Grocery Outlet wine section is impressively vast—that it, until you inspect the labels. Like Trader Joe’s or BevMo or the now-debunked California specialists Total Wine, many of the selections are in-house private labels of dubious origin. Others apparently come from ill-begotten attempts to launch a private label, often at a mass custom crush facility in places like American Canyon. One surefire sign of mediocrity is a label that lists California as its place of

origin, rather than a county or specific AVA. But interspersed among these dubious bottlings, a savvy connoisseur can often find a sprinkling of incredible bargains. Sometimes it’s a slow-moving product that a winery allocates to make room for their other selections, like the Presidential Red from Monticello Vineyards that sold briskly at $12.99/bottle or a Joel Gott Grenache, a steal at $4.99.

Other times, a notable winery will shut down and sell Grocery Outlet the bulk of their remaining inventory, which can be substantial. Throughout the pandemic, I greatly enjoyed numerous selections from Michel-Schlumberger, a winery actively seeking new ownership, whose selections at Grocery Outlet seem endless. As did those from Rock Wall, which unloaded its unsold inventory after deciding to disband.

The most recent steals, however, have come from Kenneth Volk, the pioneering Santa Maria winemaker famed for his Cabernet Pfeffer, as well as for his various Rhône-style bottlings. Ken, who was the first president of Rhône Rangers, suffered a debilitating stroke a few years back; his condition has reluctantly compelled him to close his winery and dispense with his wines still on hand, which date back to 2013. It seems Grocery Outlet will be staggering these selections, which, so far, not only have included Pinot Noir and red Rhônes like Petite Sirah and Tannat but also Blaufränkish and a wondrous Souzåo. All of which are utterly steals at $5.99!

Each of the Grocery Outlets individually manages its own inventory, so you are apt to find different selections even among stores in the same city. So, go ahead, peruse the shelves and see what you discover. You never know what gems you may find amid the Uncle Billy, Fox in the Hen House, Séance, and the Pra Vinera!