Your West Coast Oenophile has striven these many years to keep Sostevinobile out of the political fray. But I have no tolerance for the truly inane, like Q-Anon. Or Scientology. Or, for that matter, Libertarianism. This vapid construct is fraught with incongruities. Like opposing military conscription and military intervention while, at the same time supporting no limits on firearm possession. Or advocating for social equality yet railing against a progressive tax system that would level the economic disparity that is at the root of societal ills. Little wonder that I deride this “philosophy” as having something for everyone to hate!

Is it just me or do others find Natural Wine’s non-interventionist approach to œnology eerily similar to the laissez-faire economics that drive Libertarianism? It’s not that lack of manipulation necessarily leads to flawed wine—in the hands of a skilled winemaker, it can often result in a wondrous vintage. It’s that dogmatic adherence to these principles results in such pronounced disparity.

Recently, I attended a natural wine tasting in the East Bay. On hand were a few familiar faces on whom I rely for consistently excellent wines, and, once again, they did not disappoint. However, several of the wines here warranted the lowest scores I have ever given at a collective tasting; to think otherwise, to believe that these wines presented some mystical or authentic charm is pure folly. 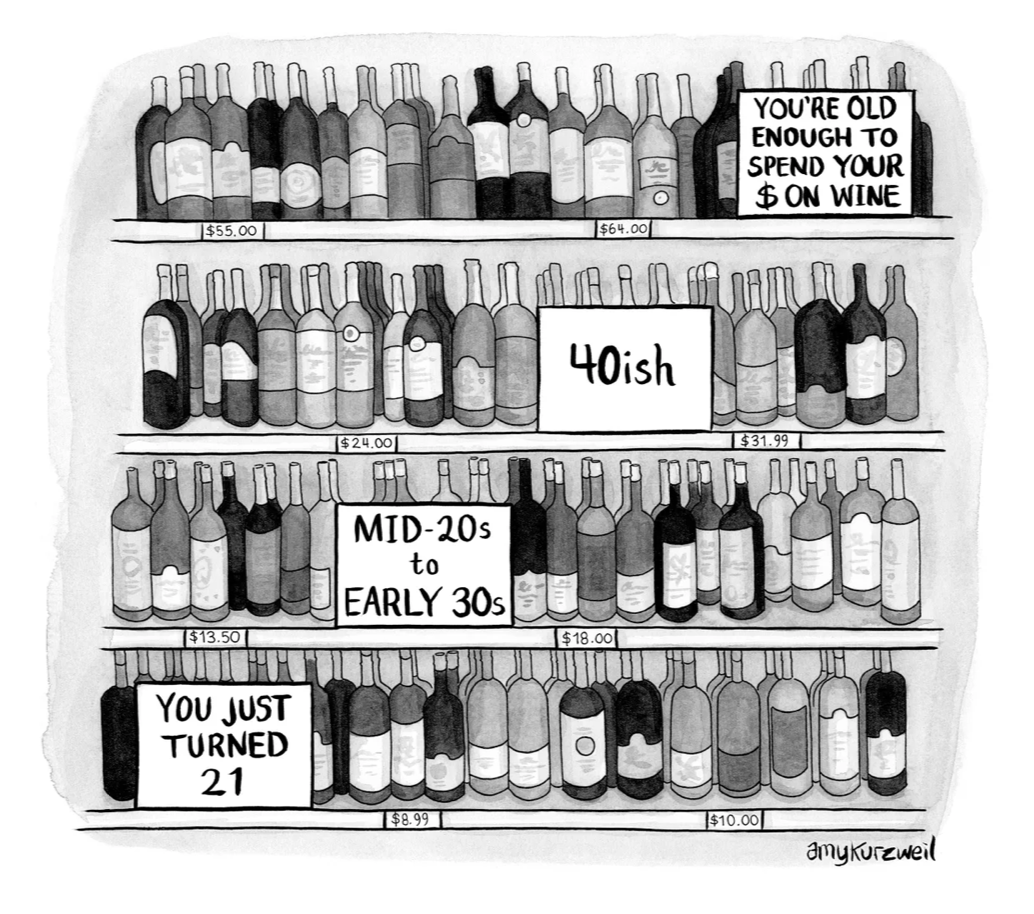 The absolute nadir of the event were the several fizzy, low-alcohol grape derivatives known as piquette. Back in the days when my hair was still blond and my beard a vibrant red, 20somethings had a similarly approximate gateway beverage, the forebears of today’s hard seltzers: wine coolers. To say that these sweetened concoctions of wine, soda water, and fruit juices are best forgotten—even though I wrote a number of incredibly amusing TV spots for Bartles & Jaymes—would be an understatement.

Maybe I’m showing my stripes (or wrinkles) by admitting my reluctance to regard Brettanomyces as character in a wine or my æsthetic fastidiousness in wanting a wine to have a clarity in its appearance. No, what makes me dismissive of the natural wine craze is the notion that these Millennial consumers dogmatically adhere to this trend out of an evolved concern both for their own personal health as well as for the well-being of the planet. Between the tents that had been set up for this event, I was stunned to see a large patch of grass covered with dozens, if not a couple hundred, cigarette butts! How does littering equate to environmentalism? How does smoking constitute engaging in a salubrious lifestyle? The conclusion here, I think, is fairly obvious: many, if not most, natural wine aficionados are not sophisticated œnophiles or enlightened consumers, but dilettantes hopping onto the trend du jour without in-depth comprehension of the health/environmental precepts which they are nominally espousing.

But I am hardly trying to throw shade on the Millennial consumer with my critique; their allegiance to the natural wine fad is nothing new. My generational jumped on the granola bandwagon, preaching the benefits of a concoction that is laughable in the face of current nutritional understanding and organic standards. Hell, we bought into Earth Shoes as a more natural way of walking! We even fell for Perrier and the subsequent bottled water craze.

I have nothing inherently against the concept of natural wine. Where I draw the line here or with any other philosophical approach to winemaking, like a compulsion to replicate site-specific, French-style terroir or the absurdity of vegan wine, is a dogmatic adherence to its strictures rather than a focus on producing consistently excellent and flavorful bottling. To quote from Randy Caparoso’s recent Op-Ed, “wine lovers would like to choose from an ever-increasing range of wines. They want it all.”

So let’s put natural wine in a proper perspective. It is but one approach to making wine among numerous other schools of œnology. When it is good, it can be very, very good, but when it is bad, it can be awful! In due course, natural wine will takes its place alongside sustainable, organic, biodynamic, regenerative, single varietal, estate bottled, etc., not the monolithic trend that currently seeks to dominate the under-40 landscape. In his essay A hands-off approach, however attractive, is suicide, British journalist James Lawrence assays the need for wineries to take an pro-active approach to sustainability in countering the detriments of climate change. Echoing Al Gore’s groundbreaking documentary, Lawrence admonishes that“a paradigm that advocates keeping human inputs to a minimal is foolhardy and counterproductive, regardless of whether Millennials go weak at the knees.”

It’s an inconvenient truth with which the unmitigated proponents of natural wine will ultimately reckon.